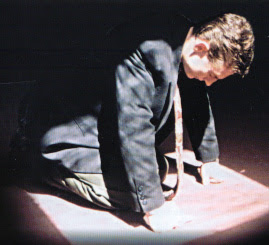 The first station on the Path, or rather its very beginning, is tauba (repentance); tauba means to turn away from sins, to abjure every wordly concern. As the poet says:

Repentance is a strange mount –
It jumps towards heaven in a single moment from the lowest place.

Tauba can be awakened in the soul by an outward event, be it a profane world, which is suddenly understood in a religious sense, a piece of paper on which a relevant sentence is written, the recitation of the Qur’an, a dream, or a meeting with a saintly person. One of the several stories about Ibrahim ibn Adham’s conversion is particularly well known:

One night, he heard a strange sound on the roof of his palace in Balkh. The servants found a man who claimed, in Ibrahim presence, to be looking for his lost camel on the palace roof. Blamed by the prince for having undertaken such an impossible task, the man answered that his, Ibrahim’s, attempt at attaining hevenly peace and true religious life in the midst of luxury was absurd as the search for a camel on top of a roof. Ibrahim repented and repudiated all his possessions.

The “world” was considered a dangerous snare on the way to God, and particularly in the time of the old ascetic harsh, crude words were uttered to describe the character of this miserable place, which was compared to a latrine – a place to be visited only in case of need – to a rotting carcass, or to a dunghill: “The world is a dunghill and a gathering place of dogs; and meaner than a dog is that person who does not stay away from it. For the dog takes his own need from it and goes away, but he who loves it is no way separated from it”. Most of the Sufis, however, would speak of the transitoriness of the world rather than of its perfect evil; for it was created by God, but it is perishable since nothing but God is everlasting. Why should the ascetic bother about it at all, since compared to the glory of God, the world is nothing more than a gnat’s wing?

The Sufis knew how often “repentance was broken” – an expression connected, in later Persian poetry, with the breaking of the wine bottle, which induced people to sin again and required renewed repentance. But the mystical leaders were sure that the door of repentance remains open, it is

i.e., until Doomsday, says Rumi, on whose mausoleum in Konya the famous lines are written:

Come back, come back, even if you have broken your repentance a thousand times.

(Annemarie Schimmel. Mystical Dimensions of Islam. The University of North Carolina Press, 1975. P.109-110)
Posted by My Reflection at 4:55 PM