The Importance of a Sheikh 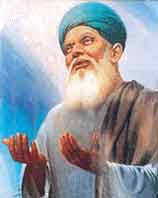 The novice who has entered a master’s group becomes “like the son of the sheikh”; he is considered part of him according to the tradition, “the son is part of the father.” The sheikh helps him to give birth to a true “heart” and nourishes him with spiritual milk like a mother, as it is often repeated.

The Sufis have always been well aware of the dangers of the spiritual path and therefore attributed to the sheikh almost unlimited authority: “When someone has no sheikh, Satan becomes his sheikh,” says a tradition, for the satanic insinuations are manifold; the murid may even feel uplifted and consoled by certain experiences that are, in reality, insinuations of his lower self or of a misguiding power. Here the sheikh has to control him and lead him back on the correct path, for

Whoever travels without a guide
Needs two hundred years for a two days journey.
(M. 3:588)

One might real all the books of instruction for a thousand years, but without a guide nothing would be achieved.

The master watches every moment of the disciple’s spiritual growth; he watches him particularly during the forty-day period of meditation (arba’in, chilla) that became, very early, a regular institution in the Sufi path (derived, as Hujwiri says, from the forty-day fast of Moses, when he hoped for a vision from God, as related in Sura 7:138). The sheikh interprets the murid’s dreams and visions, read his thoughts, and thus follows every movement of his conscious and subconscious life.

Visiting his master is a religious duty of the disciple, for he will find from him what he will not find elsewhere. And to serve a master is the highest honor of which a disciple can boast – even if it were only that he “cleaned Junayd’s latrines for thirty years”. Even to have met a leading sheikh at once endows a man with a higher rank.

Under the guidance of such a trusted master, the murid could hope to proceed in the stations on the Path. The sheikh would teach him how to behave in each mental state and prescribe periods of seclusion, if he deemed it necessary. It was well known that the methods could not be alike for everybody, and the genuine mystical leader had to have a great deal of psychological understanding in order to recognize the different talents and characters of his murids and train them accordingly. He might exempt a disciple for a time from the forty-day seclusion, for instance, because he was spiritually too weak, or because his spiritual ecstasy might overwhelm him. If the murid were to concentrate too much upon himself rather than upon God, or if passions might overcome him and make him nervous and angry, it might be better to have him live in the company of other people for his spiritual training because of the mutual influence and good example.

(Annemarie Schimmel. Mystical Dimensions of Islam. The University of North Carolina Press, 1975. P.103-104)
Posted by My Reflection at 6:32 AM