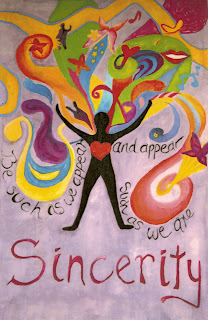 The adept should turn with his whole being toward God – ikhlas, and giving up selfish thoughts in the service of God are the basic duties of every mystic. A prayer without ikhlas is of no avail; a religious thought that is born out of this sincerity is meaningless, even dangerous. Praise and blame of the crowd do not mean anything to one who has turned wholly and without any qualification to the Lord; and though he will constantly be acting virtuously, he will forget his good and pious actions in his attempt to act solely for God. He forgets, of necessity, the thought of recompense for his works in this world and the world to come.

An act of perfect sincerity, done for God’s sake, might result in spiritual progress even though it might appear outwardly foolish.

Typical is the story of a not very bright murid whom some mischievous people teased, telling him that he would gain spiritual enlightenment by hanging himself by his feet from the roof and repeating some meaningless words they taught him. He followed their advice in sincerity and found himself illuminated the next morning.

An overstressing of the ideal of ikhlas has led to the attitude of the malamatiyya, “those who are blamed,” those who conceal their virtuous deeds in order to perform their religious duties without ostentation. For the greatest sin is riya (hypocrisy) or ostentation, and the master of psychological analysis in early Sufism, Muhasibi, dealt extensively with this danger. Sufi texts tell many stories about people whose hypocrisy was revealed, and they were put to shame. A famous example is this:

A man ostentatiously prayed the whole night through a mosque he had entered at dusk and where he had heard a sound that seemed to indicate the presence of a human being. But when the call for morning prayer was heard, he discovered that his companion in the mosque was a dog, thus rendering all his prayers invalid and himself impure.

(Annemarie Schimmel. Mystical Dimensions of Islam. The University of North Carolina Press, 1975. P.108)
Posted by My Reflection at 12:02 PM