The Pilgrimage to Mecca 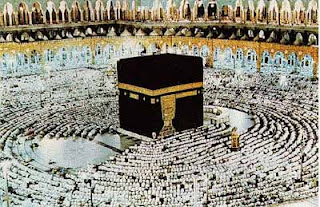 One should not forget that the shari’a, as proclaimed in the Qur’an and exemplified by the Prophet, together with a firm belief in the Day of Judgment, was the soil out of which the piety grew. The Sufis did not abolish the rites but rather interiorized them, as it was said, “The people who know God best are those who struggle most for His commands and follow closest the tradition of His Prophet”.

The performance of ritual prayer, fasting and pilgrimage to Mecca constituted, for the majority of the early Sufis, the minimal religious obligation without which all possible mystical training would be useless and meaningless. Many of them performed the pilgrimage to Mecca frequently – up to seventy times, if we can believe the hagiographers. They knew that the true seat of the divine spirit was not the Kaaba made of stone but the Kaab of the faithful worshiper’s heart, in which God might reveal Himself to those who completed the Path.

When you seek God, seek Him in your heart –
He is not in Jerusalem, nor in Mecca not in the hajj,

Says Yunus Emre, voicing the conviction of many of his contemporaries and followers. Yet the pilgrimage remained a central point in the Sufi lfe, and Mecca was not only a place where the Sufis would meet and join in discussion, but where many of them were blessed with revelations and illuminations.

(Annemarie Schimmel. Mystical Dimensions of Islam. The University of North Carolina Press, 1975. P.106-107)
Posted by My Reflection at 6:52 AM