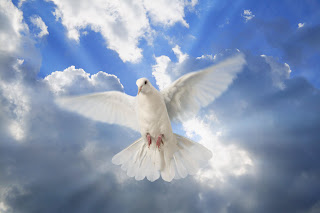 The universal Spirit (ar-Ruh), which is also called the “first intellect” (al-‘Aql al-awwal), is described sometimes as created, sometimes as uncreated. According to the saying of the Prophet, “the first thing which God created is the Spirit (ar-Ruh)”; it is created, and, according to the passage in the Qur’an where God says of Adam: “And I breathed into him My Spirit”, it is uncreated, because directly united with the Divine Nature. As for the verse in the Qur’an which describes the nature of the Spirit in these words: “They will question you about the Spirit; say to them: The Spirit (proceeds) from the Command (al-Amr) of my Lord…”(17:85), this can be interpreted in either sense – that the Spirit is of the same nature as the Divine Command – or Order – which is of necessity uncreated since it is It which creates all things, or that the Spirit proceeds from the Order and is itself at an ontological level immediately below that Order.

If there are both these aspects of the Spirit it is because it is the mediator between the Divine Being and the conditioned universe. Uncreated in its immutable essence it is yet created inasmuch as it is the first Cosmic entity. It is compared to the supreme Pen (al Qalam al-a’la) with which God inscribes all destinies on the guarded Tablet (al-Lawh al-Mahfuzh) which itself corresponds to the universal Soul (an-Nafs al-kulliyah). For the Prophet said that the “first thing God created is the Pen; He created the (guarded) Tablet and said to the Pen: Write! And the Pen replied: and what shall I write? (God) said to it: Write My knowledge of My creation till the day of resurrection; then the Pen traced what had been ordained.” So the Spirit includes all the Divine Knowledge concerning created beings, and this means that it is the Truth of truths of the Reality of realities (Haqiqat al-Haqaiq) or – according to the aspect in which is envisaged – the direct and immediate manifestation of this Reality of realities.

Certain Sufi writers, such as ‘Abd al-Karim al-Jili, give the name Holy Spirit (Ruh al-Quddus) to the uncreated essence of the Spirit and compare it to the face of God (Wajh Allah); this is what is here to be understood bu the divine Intellect.

The uncreated essence of the Spirit corresponds to what Hindus call Purusa or Purusottama; its created capture corresponds to what they call Buddhi, the “Intellectual Light”. Now Buddhi is the first product of Prakrti, the universal “plastic” Substance, and this amounts to saying that Buddhi, through supra-individual in its nature, is ‘created’, for every ‘creature’ participates in the passivity of Substance.

The Sufi term for universal Substance or the Materia Prima is al Haba. This designation of it goes back to the Caliph ‘Ali the Prophet’s spiritual successor, and signifies literally the “fine dust” suspended in the air which becomes visible only by the rays of light it refracts. The symbolism of al-Haba illustrates the double nature of the Spirit, for it is the Spirit which illumines al-Haba and thus corresponds to the ray of light refracted by the fine dust. Since the dust becomes visible only to the extent that it refracts light, the ray only shows as such on the screen of the dust.

Undifferentiated light symbolizes the uncreated Spirit while the light determined as a ray on the other hand symbolizes the created Spirit, which is in a sense “directed” like a ray. As for the fine dust which is the symbol of al-Haba this is a principle of differentiation which is invisible as such. This means – and it conforms to the symbolism of the light – that Substance has no true existence and can he grasped only through its effects. The most “gross” of its effects is precisely manifestation in quantitative more, the picture of which is given as clearly as possible by the multitude of the dust particles. As for the dust lit up by the ray of light it is nothing other than the world.

Al-Haba is to the uncreated Intellect as the universal Soul (an-Nafs al-kulliyah) is to the created Intellect. On the other hand the uncreated pair is in a sense the equivalent of universal Nature (at-Tabi’ah) and the Divine Command (al-Amr), since universal Nature, itself principally identified with the Divine “Exhalation” (an-Nafas ar-Rahmani), is as the “maternal” aspect of substance (al-Haba). Thus we have, theoretically, three cosmogonic pairs the terms of which are related to one another as masculine and feminine principles. But from the cosmological point of view it is only implicitly that the Spirit or Intellect is uncreated, for it is only the created Spirit which represents a reality distinct from God.

Again, the Materia Prima or Substance (al-Haba) can be envisaged at different levels: as for its purely principal nature, which Ibn ‘Arabi names the “Supreme Element” (al-‘Unsur al-a’zam), this is necessarily outside the scope of cosmology since it is only a non-manifested divine possibility. Such applications of the same terms to different degrees in the hierarchy of existence explain some of the seeming contradictions between one Sufi writer and another or even between different expositions by the same author.

As the mediator par excellence the Spirit is also the prototype of prophetic manifestations, and in this aspect is to be identified with the archangel Gabriel (Jibril) who announced the Word to the Virgin Mary and transmitted the Qur’an to the Prophet.

The most “central” image of the Spirit on this earth is Man. But every form necessarily omits certain aspects of its prototype and so the Spirit reveals complementary and less “central” aspects of Itself in other terrestrial forms. For example it is revealed in the form of a tree of which the trunk symbolizes the axis of the Spirit passing through the whole hierarchy of worlds while its branches and leaves correspond to the differentiation of the Spirit in the many states of existence.

A Sufi legend, probably of Persian origin, tells that God created the Spirit in the form of a peacock and showed it in the mirror of the Divine Essence its own image. The peacock was seized with reverential dread (al-haybah) and let fall drops of sweat, and from these all other beings were created. The peacock’s outspread tail imitates the cosmic deployment of the Spirit.

Another symbol of the Spirit is to be seen in the eagle which soars above the creatures of the earth, observes them from on high, and drops vertically on to its prey like a flash of lightning, for it is thus that intellectual intuition seizes its objects.

The white doves is also an image of the Spirit by reason of its color, its innocence, and the softness of its flight.

At the extreme limits of the sensory world the shining nature of the stars, and the transparence and incorruptibility of precious stones also recall aspects of the Universal Spirit.