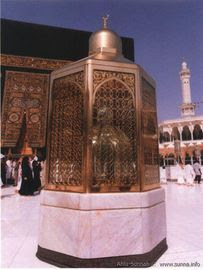 Once the mystics had identified three main parts of religious life (shari’a, tariqa, haqiqa), they began to analyze the different stages and stations that the wayfarer has to pass on his way. They distinguished between maqam (station), and hal (state). “State is something that descends from God into a man’s heart, without his being able to repel it when it comes, or to attract it when it goes, by his own effort.” Or, as Rumi puts it more poetically:

The hal is like the unveiling of the beauteous bride,
While the maqam is the [king’s] being alone with the bride.
(M 1:1435)

The mystical theoreticians were not certain whether a state could be appropriated and kept for a while or whether it was a passing experience; they also differ in their classification of the stations and in their description of certain experiences that are seen sometimes as stations, sometimes as states. Even the sequence of the stations is not always clear; it varies according to the capacity of the adept, and God’s activity can change stations or grant the wayfarer a state without apparent reason.

The manuals of Sufism enumerate still other stations; but the main steps are always repentance, trust in God, and poverty, which may lead to contentment, to the different degrees of love, or to gnosis, according to the mental predilection of the wayfarer. In order to enter the spiritual path, the adept – called murid, “he who has made up his will” (to enter the Path) – is in need of a guide to lead him through the different stations and to point the way toward the goal. Ad-din nasiha, “religion consists of giving good advice,” was a Prophetic tradition dear to the mystics, who saw in the constant supervision of the disciple’s way by the mystical guide a conditio sine qua non for true progress, though the image of the sheikh at-tarbiya, who acutely supervised every breath of the murid has developed only in the course of time.

(Annemarie Schimmel. Mystical Dimensions of Islam. The University of North Carolina Press, 1975. P.99-101)
Posted by My Reflection at 2:58 AM