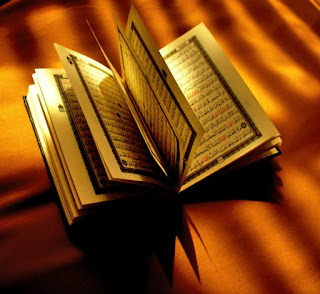 The Qur’an is a book that God revealed to Muhammad by means of the angel Gabriel. Notice that we make a distinction between the Qur’an and a translation of the Qur’an. This is normal procedure in the Muslim view of things, in marked contrast with the Christian view, according to which the Bible is the Bible, no matter what language it may be written in. For Muslims, the divine Word assumed a specific, Arabic form, and that form is as essential as the meaning that the words convey. Hence only the Arabic Qur’an is the Qur’an, and translations are simply interpretations.

The Arabic form of the Qur’an is in many ways more important than the text’s meaning. After all, Muslims have disagreed over the exact interpretation of Qur’anic verses as much as followers of other religions have disagreed over their own scriptures. One of the sources of the richness of Islamic intellectual history is the variety of interpretations provided for the same verses. Muslim thinkers often quote the Prophet to the effect that every verse of the Qur’an has seven meanings, beginning with the literal sense, and as for the seventh and deepest meaning, God alone knows that. (The Prophet’s point is obvious to anyone who has studied the text carefully.) The language of the Qur’an is synthetic and imagistic – each word has a richness having to do with the special genius of the Arabic language. People naturally understand different meanings from the same verses.

The richness of Qur’anic language and its receptivity toward different interpretations help explain how this single book could have given shape to one of the world’s great civilizations. If everyone had understood exactly the same thing from the text, the religion would never have spread as widely as it has. The Book had to address both the simple and the sophisticated, the shepherd and the philosopher, the scientist and the artist.

The Qur’an says that God never sends a message except in the language of the people to whom it is addressed: Revelation conforms to the needs of its recipients. The Qur’an also tells us that Muhammad was sent to all the world’s inhabitants. In order to present a message understandable to everyone in the world, the Qur’an had to speak a language that everyone could understand. And Islam did in fact spread very quickly to most of the civilizations of the world, from Chine and Southeast Asia to Africa and Europe. These people spoke a great diversity of languages – and we mean not only languages of the tongue, but also languages of the heart and mind. The Qur’an has been able to speak to all of them because of the peculiarities of its own mode of discourse.

Far from being a hindrance to the spread of Islam, as some have imagined, the Arabic language has been an aid. Although the form of the text was fixed, the meaning was left with fluidity and adaptability. People who did not know Arabic were forced to learn the Arabic text and then understand it in terms of their own cultural and linguistic heritage. But no one’s interpretation could be final. The next generation could not depend exclusively upon the previous generation’s translation and commentary any more that it could ignore the understanding of the text established by the tradition. Each Muslim needs to establish his or her own connection with the scripture. All serious Muslims were forced to enter into this Arabic universe of discourse – a universe, indeed, which they considered divine.

If, on the one hand, the Arabic Qur’an encouraged diversity of understanding, on the other, it encouraged unity in form. All Muslims recite the same scripture in the same language. They recite their daily required prayers more or less identically. Indeed, given the basic importance of God’s revealed Word, recitation is the major way of participating in the Word. Understanding is secondary, because no one can fathom the meaning of God’s Word completely. The most important task is to receive and preserve the divine Word. Its Arabic form is all-important. What one does with the form that one receives follows after receiving it.

A translation of the Qur’an is not the Qur’an, but an interpretation of its meaning. The Qur’an has been translated dozens of times into English. Each translation represents one person’s understanding of the text, each is significantly different from the others, and none is the Qur’an itself. There is but one Word, but there are as many interpretations of that Word as there are readers.

This is not to say that Islam is a cacophony of divergent interpretations – far from it. By and large there is much less diversity of opinion on the fundamentals of faith and practice than, for example, in Christianity. Those who try their hand at interpretation have to undergo a great deal of training to enter into the Qur’an’s world of discourse. Moreover, this training is accompanied by the embodiment of the Qur’an through recitation and ritual. The Qur’an possesses an obvious power to transform those who try to approach it on its own terms. This is precisely what Islam is all about – submission to the will of God as revealed in the Qur’an – but this is not simply a voluntary submission. The Qur’an establishes an existential submission in people so that they come to express its fundamental message through their mode of being, no matter how “original” their interpretations may be.

Of course, we are speaking of Qur’anic interpretation in the context of Islamic faith and practice. Many Westerners who have not been sympathetic toward Islam have offered their interpretations of the Qur’anic text. There is no reason to suppose that such interpretations will help non-Muslims understand the text that reveals itself to Muslims.

The Arabic book that goes by the name Qur’an is about as long as the New Testament. In most editions it is between 200 and 400 pages in length. In contrast to the Hebrew Bible and the New Testament, the Qur’an issued from the mouth of a single person, who recited what he heard from the angel Gabriel. Both the Jewish and the Christian scriptures are collections of many books that were written down by a large number of human beings, and opinions differ as to their status as revelation. Even if we say that the book of the Bible were all revealed, they were revealed to different people who did not live at the same time or in the same place.

The Qur’an is divided into chapters of unequal length, each of which is called a sura, a word that means literally “a fence, enclosure, or any part of a structure.” The shortest of the suras has ten words, and the longest sure, which is placed second in the text, has 6,100 words. The suras are divided into short passages, each of which is called an aya. Some of the longer ayas are much longer than the shortest suras. The word aya is often translated as “verse”, but literally it means “sign.”

The Qur’an elaborates on the ways in which the followers of the prophets, specifically the Jews and the Christians, have or have not lived up to the prophetic messages. It issues instructions on how to love a life pleasing to God. It tells people that they should pray, fast and take care of the needy. It goes into great detail concerning human interrelationships – such as laws of inheritance and marriage – in a manner reminiscent of parts of the Hebrew Bible but foreign to the New Testament. It tells people that they should observe God’s instructions purely for God’s sake, not for any wordly aims. It warns those who deny God’s messages that they will be thrown into the fire of hell, and it promises those who accept the messages that they will be given the bliss of paradise. Much more than the Judeo-Christian Bible, the Qur’an talks specifically about God. No matter what the topic may be, it finds occasion to refer the discussion back to God, if only by the device or attaching clauses mentioning God by one or more of his names, such as “And God is the Mighty, the Knowing.”

For Westerners, the Qur’an is an extremely difficult text to appreciate, especially in translation. Even for those who have spent enough years studying the Arabic language to read the original, the Qur’an may appear as disorderly, inaccurate, and illogical. However, there is enough evidence provided by Islamic civilization itself, and by the great philosophers, theologians, and poets who have commented on the text, to be sure that the problem lies on the side of the reader, not the book. The text is undoubtedly one of the most extraordinary ever put down on paper. Precisely because it is extraordinary, it does not follow people’s expectations as to what a book should be.

The Qur’anic world view is closely tied to the Arabic language, which like Hebrew and Aramaic (the language spoken by Jesus), belongs to the Semitic family. The internal logic of Semitic languages is very different from that Indo-European languages such as English, Latin, Sanskrit, and Persian. To begin with, each word derives from a root that is typically made up of three letters. From the three letter root, many hundreds of derived forms can be constructed, though usually only a few score of these are actually used. We should often discuss Arabic words in explaining the meaning of concepts. Without such discussion it would be impossible to suggest the richness of the associated meanings, the difficulty of translating words into English, and the interrelationships among Arabic words that are obvious in the original.