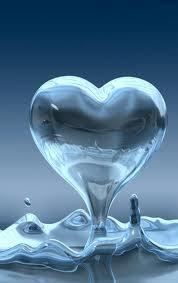 One day, one of God’s lovers goes to the home of his shaikh. The shaikh begins to speak to him about love. Little by little, as the shaikh speaks, the lover begins to melt, becoming more and more subtle until he just flows like a trickling stream. His whole physical being dissolved in front of the shaikh, until there was nothing but some water on the floor.

Just then a friend of the shaikh enters the room and asks, “Where is that fellow who just arrived?” The shaikh points to the water on the floor and says, “That man is that water.”

This kind of melting is an astonishing transformation of state. The man lost his destiny is such a way that he became what he originally was: a drop of liquid. Originally he had arrived at human form from water, for as God has said: “We created all of life from water.”

This lover merely returned to his original essence, the water that is the source of life. And so we may draw the following conclusion: A lover is that being by whom everything is brought to life.

(Kabir Helminski. The Knowing Heart: A Sufi Path to Transformation. Shambala Publications, Inc. Boston, 1999. P.3)
Posted by My Reflection at 5:39 AM