The Human Being and The Cosmos 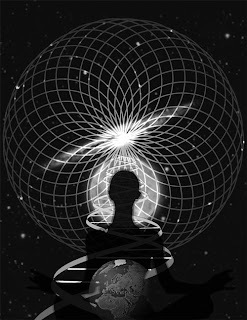 The human being and the cosmos are similar in that each was created in the form of God. However, the cosmos manifests the divine names in differentiated mode (tafsil). As a result, each and every divine name displays its properties and effects in the cosmos singly or in various combinations with other names or groups of names. Hence, in its spatial and temporal totality, the cosmos represents an infinitely vast panorama of existential possibilities. In contrast, human beings display the properties and effects of all the names in a relatively undifferentiated mode (ijmal). The properties of all the divine names are drawn together and concentrated within each of them. God created the cosmos in respect of the multiplicity of His names, but He created human beings in respect of the unity of His names, the fact that each and every name refers to a single Reality. Ibn ‘Arabi often expresses these ideas by employing the terms “small world” and “great world” – that is, microcosm and macrocosm. More commonly, he uses the expression “small human being” or “microanthropos” for human being and “great human being” or “macroanthropos” for the universe.

Since human beings are a part of the cosmos, the cosmos is not a complete divine form without them. Nevertheless, microcosm and macrocosm stand at opposite poles. The macrocosm, in its indefinite dispersion, is unconscious and passive. But the microcosm, through its intense concentration of all the divine attibutes, is conscious and active. Human beings know the cosmos and can shape it to their own ends, but the cosmos does not know human beings and cannot shape them except to the extent that it is a passive instrument in the hand of God.

The fact that the microcosm dominates over the macrocosm leads the Shaykh (Ibn ‘Arabi) to write at the beginning of the ‘Fusus al-hikam’ that the human being is the spirit of the cosmos, while the cosmos without the human being is like a proportioned and well-balanced body, ready and waiting for God to blow His spirit into it, but lifeless as long as the human being has not appeared. Similarly, he writes as follows in the ‘Futuhat’:

Because of the organic relationship between human beings and the cosmos, Ibn al-‘Arabi calls perfect human beings the “Pillar” of the cosmos. Without them, the cosmos would collapse and die, which is precisely what will happen at the end of time when the last perfect human being departs from this world. Cosmologically speaking, the corruption and decay of the natural and social environments in modern times is one of the outward signs of the diminishing number of perfect human beings on the face of the earth.

(William C. Chittick. Imaginal worlds: Ibn al-‘Arabi and the problem of religious diversity. State University of New York, Albany. 1994. P. 33-34)
Posted by My Reflection at 5:59 AM