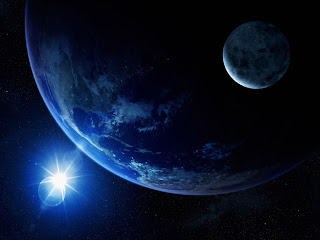 The concept of the continual re-creation of the cosmos became a mainstay of Islamic cosmological thinking. Many authorities interpreted this constant change and transmutation in terms of the interplay of the diverse divine names. Thus, at each instant, the divine mercy and gentleness create all things in the universe. In other words, at each instant God reaffirms His similarity with things and His presence in the cosmos. But God is also incomparable and other. Hence, just as His mercy creates, his wrath destroys. His unique and absolute reality displays “jealousy” (ghayra): it does not allow any “others” (ghayr) to exist alongside it.

At each instant, the divine gentleness brings the world into existence, and at each instant the divine severity destroys it. Every succeeding moment represents a new universe, similar to the preceding universe, but also different. Each new universe represents a new self-disclosure of God. According to the cosmological axiom, “God’s self disclosure never repeats itself,” since God is infinite.

The cosmos is a constantly shifting and changing pattern of relationships among God’s signs, which are the loci of manifestation for His names. The universe is created and maintained through the activity of opposite divine attributes that display the activity of the single Principle. Hence duality can be perceived at every level. However, if we look more closely, we should be able to see the opposing forces not as absolutely opposed, but rather as complementary or polar. Yin and yang are working together everywhere, producing transmutation and constant change.

The Qur’an quotes God as saying, “And of everything We created a pair” (51:49). Or again, “God himself created the pair, male and female” (53:45). All things in the universe are paired with other things. Several of the pairs mentioned in the Qur’an take on special importance as the fundamental principles of creation. These include the Pen (al-qalam) and the Tablet (al-lawh), which are specifically Islamic symbols, and heaven and earth, which find deep parallels in the Chinese tradition and elsewhere.