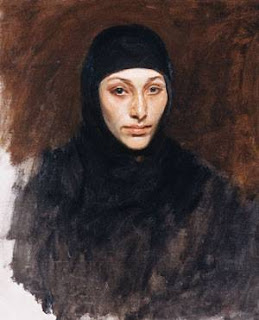 God has made dear to me from your world women and fragrance,
And the joy of my eyes is in prayer.

This saying of the Prophet Muhammad has been quoted a number of times now – so how is it possible that Islam should have come to be known as a religion with a negative view of women? And yet, over the centuries and under the influence of growing legalistic and ascetic movements, the woman in Islam has been relegated to a position far removed from the one she knew and enjoyed during the times of the Prophet and his successors.

This is why it is impossible to overestimate the role the Prophet’s first wife, Khadija, played in defining the woman’s place in Islam. This widowed merchant woman was already the mother of several children when she proposed marriage to her significantly younger co-worker Muhammad and subsequently bore his children. She was also the one who consoled and supported him after his first visions and auditions and who convinced him that the revelations he experienced in the cave at Mount Hira during his meditations were not of demonic but rather of divine origin. Khadija rightfully bears the honorary titles Mother of believers and The Best of Women, khair un-nisa (the latter still a favorite name for women). Modern Muslims, including a mojority of women Muslims, repeatedly stress her essential contribution to the early history of Islam. She loved Muhammad deeply, and it was only after her death in 619 and after more than a quarter of a century together, that Muhammad gradually and over the course of time married a number of other women. Among his later wives was the very young ‘Aisha, the daughter of his loyal friend Abu Bakr. The other women were widows or divorcees, some even former slaves.

In the early days of Islam women were actively involved in all aspects of social life and communal affairs. ‘Aisha used to discuss problems arising from tradition with the Prophet’s companions, and not only with them. In 656 she actually rode to battle herself in order to fight against ‘Ali bin Abi Talib and his partisans.

Even if the woman’s position has deteriorated in many respects since the days of the Prophet, she continues to play a very important role in Sufism. This mystical branch of Islam came into being in the early eighth century, about a century after the Prophet’s death. It was initially a purely ascetic movement that strove to counteract or work against the Muslims’ increasing worldliness and to remind them of their religious duties. Sufism gained in strength and number during the expansionist period of the Islamic empire. By 711 the Muslims had not only crossed the Straits of Gibraltar (which still bears the name of its conqueror, Jabal Tariq) but had also penetrated into Sind, the lower Indus Valley (today the southern part of Pakistan) and had crossed into Transoxiana as well, all on their way to Centra Asia.

The ascetics, however, were more interested in conquering the kingdoms of the heart and the soul, and it is of no small significance that a central role in this endeavor fell to a woman. The name Rabi’a al-Adawiyya or Rabi’a of basra heralds the beginning of the actual mystical movement in Islam. She is the one credited with having transformed somber asceticism into genuine love mysticism. Everyone knows the story of how the pious ascetic ran through basra with a mucket of water in one hand and a burning torch in other, and when asked about the reason behind her action, she replied: “I want to pour water into hell and set paradise on fire, so that these two veils disappear and nobody shall any longer worship God out of a fear of hell or a hope of heaven, but solely for the sake of His eternal beauty.”

This popular legend found its way into the Christian world as well. It was intoduced to the West by Joinville, the representative of Louis IX, and was retold by the Quietist Camus in his book Carite ou la Vraie Charitee, which appeared in 1640. the illustrations show a woman in oriental dress with a torch and a bucket, over whose head a sun beams with the Hebrew inscription YHWH. After that she turns up in every cenceivable variation in European literature.

Rabi’a was not the only pious ascetic to devote herself completely to the love of God. A female relative of the Prophet, Umm Haram, was already supposed to have participated with ardent enthusiasm in the first Muslim expedition against Cypress and is said to have fallen in battle as a “martyr” in the Holy War.

We also know Bahriyya al-Mausuliyya, who wept herself blind. This is a common motif, for it was felt that physical blindness enables a person to see the Divine Beloved all the better, especially because, as it was later believed, the eye is no longer a veil between the person looking and the one being looked at.

Sha’wana is another interesting figure among the early ascetics; she is also famous for her incessant weeping. Even the great ascetic Fudayl ibn ‘Iyad (d.803) is supposed to have asked her to pray for him. The pious Sufi Bishr al-Hafi, known as “The Barefooted One” (d.841) as well as the great traditionist Ahmad ibn Hanbal (d. 855) approached Amina ar-Ramliyya to ask for her intercession, and it was through her that they learned of their reprieve from hell.

Ghazali tells how Sha’wana appeared to one of her friends in a dream after she (Sha’wana) had died and been highly honored by the inhabitants of paradise. She gave the dreaming woman the following advice: “Let your heart be very sad and let the love of God override your desires. Then nothing will harm you to your dying day.”

Thoughts about death and the afterworld are characteristic of the early women ascetics. Another woman who tradition says also came from Basra was Mu’adha. She deprived herself of as much rest as was humanly possible, for the very thought of the long sleep of the grave was enough to keep her awake.

Ibn ‘Arabi’s attitude toward women is particularly interesting. His memories of the great women ascetics of Seville, whom he had met while still a youth, were very vivid. One, for instance, was Fatima bint al-Muthanna, a woman who lived in extreme poverty. She had been married for many years before her husband died of leprosy. “She was a consolation for the inhabitants of the earth” are the words the Andalusian master used to describe her and to report of her strange miracles. The Sura al-Fatiha, the first chapter of the Quran, served her and fulfilled all her desires. So much so, in fact, that she once even restored an unfaithful husband to the wife who had turned to the saint with her pleas for help. Despite her poverty, Fatima, who described herself as Ibn ‘Arabi’s “spiritual mother” (and whom the biological mother of the great theosophist actually visited on occassion) was possessed of an unflappable cheerfulness. She would sometimes play the tambourine and joyfully praise the glory of God:

I rejoice in Him. Who was turned toward me and claimed me as one of His Friends. Who has used me for His own purposes. Who am I that He should have chosen me among all of mankind? He is jealous of me, and if I look to others, He loosens afflictions against me.

Very good post about one of the "black holes of sufism" It´s a pity that few persons comments about this.