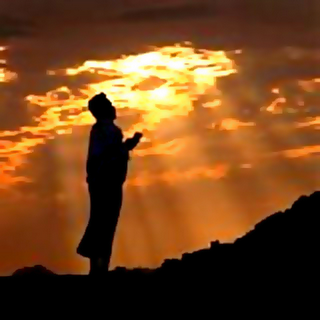 The central attitude in Sufi life is that of faqr, “poverty.” The Qur’an (Sura 35:16) has contrasted man in need of God with God, the ever Rich, the Self-sufficient, and here lies one of the roots od the Sufi concept of poverty. In fact, the main names under which the mystics have been known in the West – though often in distorted images – are faqir, “poor,” and dervish, “poor, mendicant.” Poverty was an attribute of the Prophet, who claimed, according to the tradition, faqri fakhri, “poverty is my pride.” There are numerous legends about the destitute state and the poverty of his household and the members of his family.

The Sufis considered outward poverty a necessary station at the beginning of the Path, and they tried to preserve it as long as possible, often throughout their lives. There is no reason to doubt the validity of the stories in which the utter destitution of some of the great mystics is dramatically described. The reed mat on which the mystic slept, and which often constituted his only worldy possession, became in later Persian poetry a symbol of spiritual wealth, since it gives its owner a rank higher than that of Solomon on his air-borne throne:

Everyone who has to write the manuscript of the etiquette of Poverty
Puts a ruler from the strips of the reed-mat on the pages of his body.

Poverty interpreted in a spiritual sense means the absence of desire for wealth, which includes the absence of desire for the blessings of the otherworld. One of the aspects of true faqr is that the mystic must not ask anything of anyone – Ansari, though utterly poor, never asked his wealthy friends even for a blanket, though he knew that they would have wanted to give him one, but “since they did not perceive my misery, why ask them?” For to ask would mean to rely upon a created being, and to receive would burden the soul with gratitude toward the giver, a burden that was considered most embarassing and heavy; both in poetry and in everyday speech this feeling of minnat, “gratitude,” has a negative value for the faithful.

Hujwiri spoke, correctly, about the form and the essence of poverty: “Its form is destitution and indigence, but its essence is fortune and free choice”. The dervish, the Sufi, may be rich if he has the right attitude, which means that his outward wealth and power are of no interest to him and that he would be willing to give them up at any moment. The final consequence – after quitting this world and the next – is to “quit quitting” (tark at-tark), to completely surrender and forget poverty, surrender, and quitting. About the year 900, there was discussion in Baghdad and elsewhere about the superiority of the poor or the rich. Most of the Sufis agreed that faqr was superior and preferable to wealth, provided that it was combined with contentment – and this is the general solution found in later medieval Sufism, as in Abu Najib as-Suhrawardi’s Adab al-muridin.

Many of the early sources are filled with the praise for the true faqir and sometimes equate him with the genuine Sufi. Yet Jami, following Abu Hafs ‘Umar as-Suhrawardi’s distinction among “ascetic,” “poor,” and “Sufi,” as explained in the ‘Awarif al-ma’arif, regarded the faqir, in the technical sense, as inferior to the real Sufi, for whom faqr is nothing but a station on the Path. If he makes poverty a goal in itself, the faqir is veiled from God by his very “will to be poor”. That is basically an elaboration of a saying by Ibn Khafif: “The Sufi is he whom God has chosen (istafa) for Himself, out of love, and the faqir is he who purifies himself in his poverty in the hope of drawing near [to God]”.

Others have praised faqr as the central quality of the mystic, as Rumi says in an
Interesting comparison:

It is like the highest sheikh, and all the hearts are murids, the hearts of the lovers turn
Around it. (D 890)

Hujwiri has described this kind of poverty very beautifully:
Dervishhood in all its meaning is a metaphorical poverty, and amidst all its
subordinate aspects there is a transcendent principle. The Divine mysteries come and
go over the dervish, so that his affairs are acquired by himself, his actions attributed to
himself, his actions attributed to himself, and his ideas attached to himself. But when his affairs are freed from the bonds of acquisition, his actions are no more attributed to himself. Then he is the Way, not the wayfarer, i.e., the dervish is a place over which something is passing, not a wayfarer following his own will.

Faqr here, is almost equated with fana, “annihilation in God,” which is the goal of the mystic, as Rumi said once in the Mathnawi. For Atter poverty and annihilation constitute the seventh and last vale on the Path leading to God, after the traveler has traversed the valleys of search, love, gnosis, independence, tauhid and bewilderment.

The equation of faqr with annihilation, and the emphasis on the negative, nonexistent aspect of things is expressed, in Islamic art, by the large empty hall of the mosque, which inspires the visitor with numinous grandeur. It is also reflected in the negative space in the arabesques or in calligraphy. Only by absolute faqr can the created world become a vessel for the manifestations of God, the eternally rich.